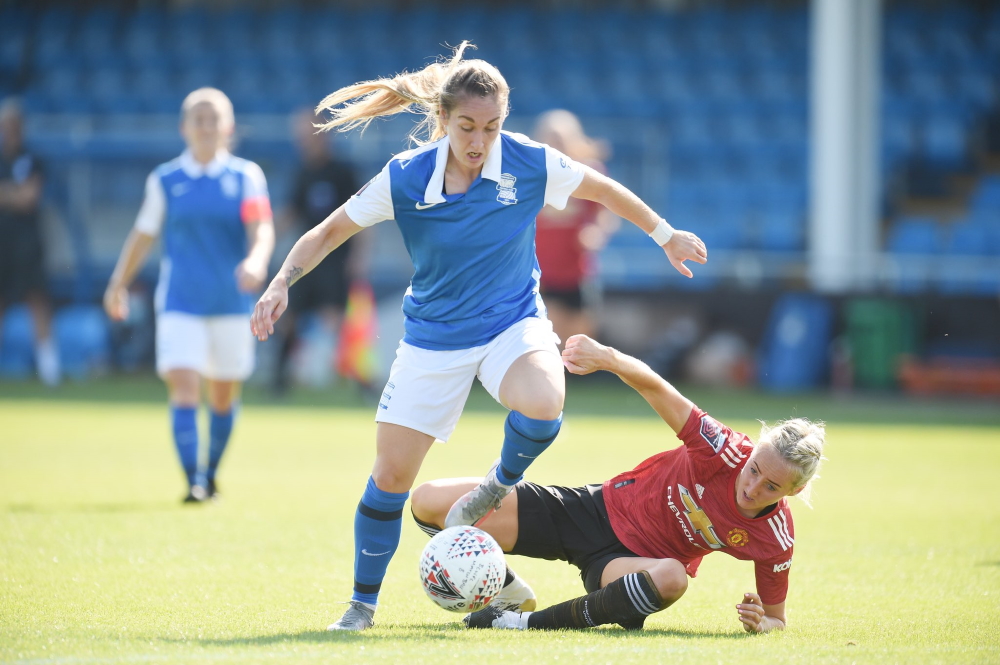 Birmingham City Women played much better today especially in the first half but mistakes at the back cost Blues their first points of the season. Head Coach Carla Ward made a number of changes including giving debuts to defender Rachel Corsie and midfielder Mollie Green. Harriet Scott moved into Right Back and Sarah Mayling played on the wing as part of a front three.

Birmingham conceded very early on with a goal from Jane Ross that on any other day you would have expected keeper Hannah Hampton to reach and palm away. That goal seemed to affect Hampton’s confidence and she ended up conceding five goals which was very uncharacteristic of her and wasn’t even a glimpse of the acrobatic Hampton we normally enjoy watching.

However, Blues recovered well and Mollie Green won the ball in midfield to play a clever ball into the feet of Claudia Walker who muscled her opponent to find herself some space and shot powerfully into the corner. Blues now had an air of confidence about them and for periods of the first half we looked the better team. There were some good passes amongst the midfielders including Christie Murray and Mollie Green which enabled Blues to get the ball forward as often as we could.

Blues won a free kick on the far left of the field and Sarah Mayling whipped in a delightful cross which United defender Abbie McManus struggled to deal with and the ball ended up in the back of the net. Birmingham’s Twitter account credited the goal to Mayling although the BBC claim it was McManus’s own goal. Surely, if the ball was going in anyway then you have to credit the attacker, in this case it was Sarah Mayling’s first goal for the club.

Having taken the lead Blues could have and should have capitalised on their advantage. However, one thing head coach Ward won’t be pleased about is our ability to get the ball out from the back without losing it. From being 2-1 down, United went on to equalise and then score another three to stamp their dominance especially during the second half. There are definitely some obvious areas for Ward to work on with the team over the next two weeks before our next game.

It was a great shame we were exposed to our weaknesses and lack of concentration at the back because at times Blues looked very promising on the break. We could easily have scored another two goals with Sarah Mayling being the provider on both occassions. The first one was a direct cross sent across the six yard box which Emma Kelly connected with but agonisingly sent her shot just wide of the post.

The second was a powerful cross by Mayling which Harriet Scott threw herself at but headed just wide of the goal. Blues are definitely missing our top scorer from last season, Abbi Grant who surely would have buried both those chances.

Overall there are many positives to take from this game as we have improved so much from the Brighton game. Mollie Green looks like a promising midfielder getting involved in many moves and Harriet Scott got forward as much as she could. Emma Kelly did well too but like many of her team mates needs more games to find that match sharpness. Very promising for Blues and we must now build on the positives!

Blues Women Fans PLAYER OF THE MATCH: Sarah Mayling – provided two stunning crosses into the box that we really should have scored from and delivered a fantastic free kick that we will credit her for the goal!