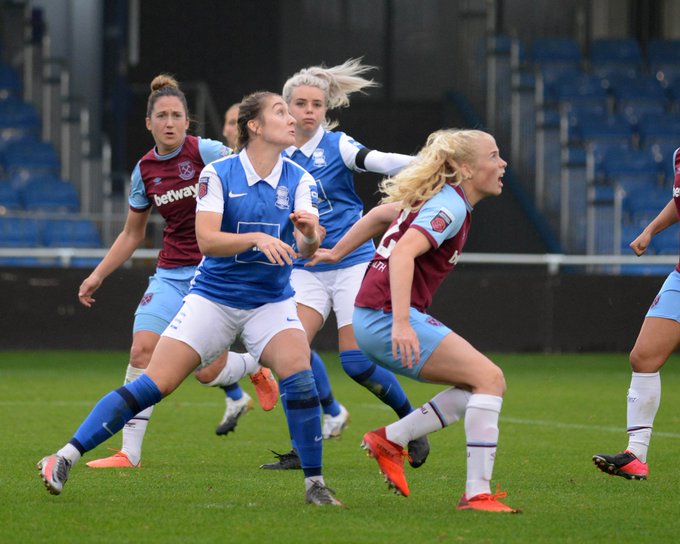 Today was a case of IFs and MAYBEs as Blues hit the post three times but in the end were undone by a dogged and determined West Ham United side.

Blues started the game brightly with a counter attack within the first 10 minutes that found Claudia Walker in acres of space. She took the ball under her control really well and slotted past the advancing West Ham keeper, Arnold. One-nill to Blues and things are looking up!

We could have made it two-nill in the first half with some skill from Sarah Mayling inside the area who turned and shot across the face of the goal only for the ball to bounce off the post. The rebound then found its way to Christie Murray who put the ball wide. Mayling was at it again moments later when she put a great cross in for Jamie-Lee Napier but her low drive was saved by the keeper.

For me the turning point then came when the West Ham United full-back sent a crunching tackle into the legs of Sarah Mayling who was injured too badly to continue. Emma Kelly came on to replace her but I think after 35 minutes played Blues started to lose their shape and allowed West Ham back into the game.

In fact West Ham did exactly that just before half-time. The ball was crossed into the box and Blues struggled to deal with it and under pressure Claudia Walker directed the ball into the back of her own net. West Ham had a lifeline.

Blues midfielders worked well together at times involving Connie Scofield, Mollie Green and Christie Murray and the skipper managed to get another shot on goal but it didn’t have the pace to beat the keeper. Moments later Walker found herself in space again about 30 yards out and hit another wonder strike which dipped and curled with such pace but unfortunately it bounced off the corner of the bar.

In defence, Corsie and Brougham held strong for most of the game and Scott was her usual self getting involved in a number of tackles to break up the play. However, the defender that stood out today for me was Becks Holloway who made some great runs down the flank linking up with Jamie-Lee Napier on a number of occassions.

On the other flank, with Mayling off injured, we didn’t create many more chances. It will take time for Emma Kelly to get back to full match fitness but she showed several glimpses of what she is capable of.

However, in the end West Ham managed to find a winner with Van Egmond heading past Hampton in the final 15 minutes, after which they managed to hang on for the win.

Blues now have six days to put things right before our next game against local rivals Aston Villa. We’ll definitely want Sarah Mayling back for that one!

Blues Women Fans PLAYER OF THE MATCH: Claudia Walker – this girl can’t stop scoring! A very well taken goal and almost a second with a wonder strike. Didn’t stop running all afternoon and deserves all the credit she gets.