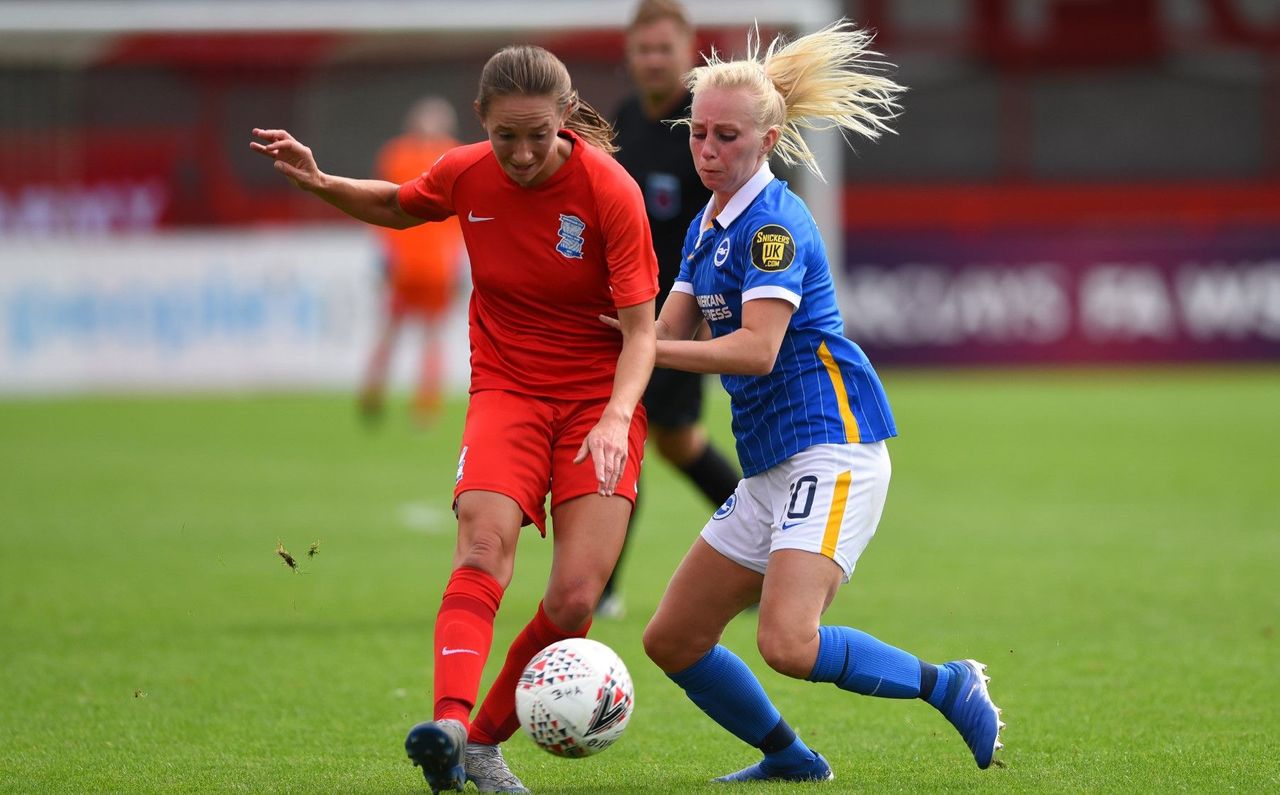 Birmingham City Women announced two new players whilst the team were en route to the game in Sussex. Jamie-Lee Napier on loan from Chelsea and Destiney Toussiant from London Bees were both announced hours before the Kick Off so Blues Women Fans were left guessing how the team would line up.

Blues lined up with four of the six newcomers in the starting lineup… Captain Christie Murray in the number 10 position and behind her were debutants Chloe McCarron and Jamie-Lee Napier and Georgia Brougham slotted straight back in as a Centre Back.

Sarah Mayling resumed her position as Right Back but there was a surprise in the rest of the back four as Harriet Scott swapped places with Rebecca Holloway who played as a Left Back. Lucy Whipp acted as the Defensive Midfielder and Connie Scofield had a deserved starting place on the left wing. Up front Claudia Walker had a good game as the lone striker.

Blues held their own in the first half keeping the score level at the break albeit with a stroke of luck as Brighton hit the bar twice. After the break, Birmingham started to lose their way as Brighton struck twice in quick succession after which Blues never looked like recovering.

Hannah Hampton had a decent game but Blues need to be careful they don’t get caught out when trying to play out from the back with several passes between the keeper and the defenders when it maybe better to get the ball upfield quicker.

Emma Kelly came on soon after the break but Blues found it hard to make it count in the final third. Destiney Toussaint came on with just five minutes to go but by then it was too late to get anything from the game.

Blues didn’t get any favours from the referee and he seemed to award Brighton several free kicks which on another day another ref would have left play to continue. It was noted that he booked four Blues players and none from Brighton.

Overall, Blues lost to the better side, but its early days and with two of the starting eleven having never played even a preseason friendly for Blues before it was always going to be a difficult task. There will be bigger challenges than Brighton in the games to come and if Blues are to fair better than they did last season they will have to quickly adapt and gel as a new team.

Blues were definitely missing the firepower of Abbi Grant who is carrying a knock but it was a bit unexpected to see Rachel Corsie as an unused substitute so we can only assume she wasn’t 100% fit.

I’m sure Head Coach Carla Ward will be pleased to have got this first game under her belt and now she has a full week in training to get the players playing the way she’d like them to. It’s a long, long road…