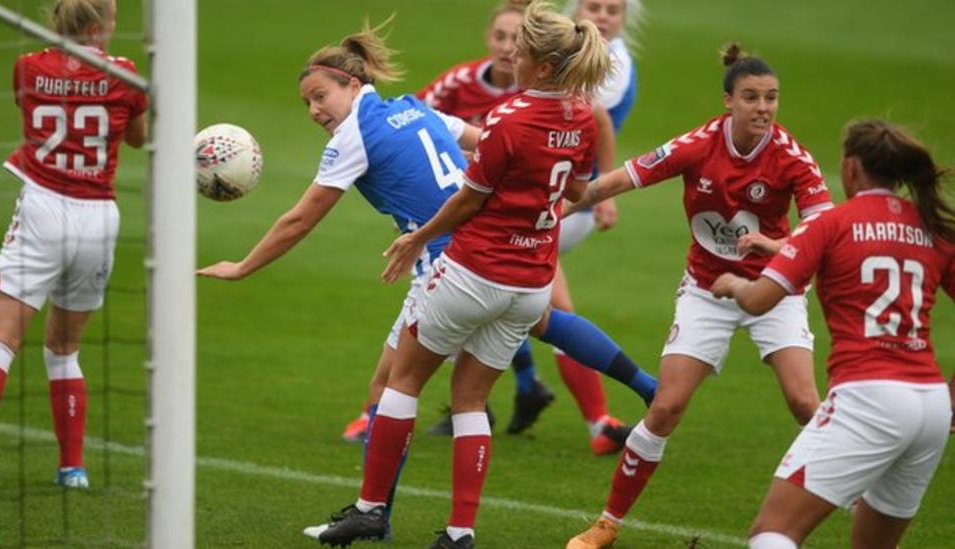 Birmingham City Women picked up their second league win in two as they comfortably ran out 4-0 winners away to Bristol City. Goals from Rachel Corsie, Mollie Green, Claudia Walker and a penalty from Captain Christie Murray sealed the result at Twerton Park.

Blues actually started the game on the back foot with Bristol settling into the game faster but after 10 minutes Blues started to dominate which they did so for the remainder of the game.

The ever reliable Sarah Mayling was on corner duty and she whipped in a delightful cross that landed perfectly for Rachel Corsie to direct a header into the corner of the goal away from Baggaley.

In midfield Connie Scofield was literally everywhere. Midway through the first half she picked up a pass from Mayling and then worked her magic in the penalty area to find space to pick out the perfect pass for Mollie Green to shoot and direct it into the goal.

Scofield was at it again in the second half. She interacted well with Green and Napier and she then slotted the ball back to Walker who turned and struck the ball high into the top corner of the goal. Claudia Walker is simply on fire!

Blues got their fourth after a foul in the penalty area and the referee pointed to the spot. Murray stepped up and buried the ball past Baggaley who dived the right way. That was it as far as goals were concerned. Ex-Blues keeper Sophie Baggaley played her part to keep the scoreline down with saves from Abbi Grant, Claudia Walker and Rachel Corsie.

In truth, Bristol could not find a way past a resolute Birmingham defence. The partnership of Corsie and Brougham is working really well and teams are finding it hard to break us down. On the flanks, Scott linked up well with Mayling and Holloway and Napier didn’t seem to stop running all game. In goal, Hannah Hampton will be glad of not having too much to do. Overall it was a superb team performance!

They say confidence breeds success and Blues will now go into the international break knowing they fully deserve their mid-table position.

Blues Women Fans PLAYER OF THE MATCH: Rachel Corsie – was an absolute rock in defence. Nothing was getting past her and at the other end she scored with a wonderful header.