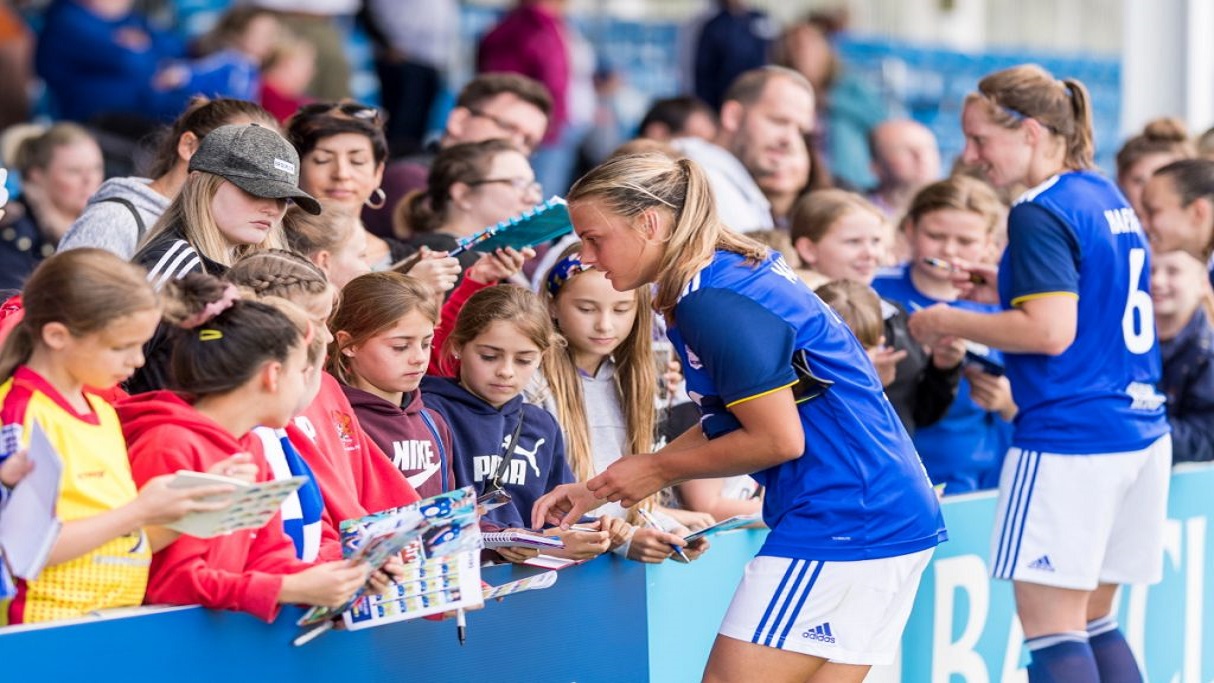 Here’s something many people quote when it comes to football:

Football without fans is nothing…

Women’s football is very different to Men’s. The players engage with the fans a lot more. At the end of a game, it’s always nice to talk to the players and I’m sure the players feel likewise towards the fans.

However, there are many distractions going on…

The biggest factor though is TIME. Time is usually very limited by the side of the pitch or in the club house or outside the stadium.

The home games used to be really good… Most players staying behind for a chat and many of them going into the club house to talk to fans, families and other players before heading home. This used to create a real community feeling amongst fans, families, staff and players all being “in it together” but occasionally some players would leave by other exits before you’ve had a chance to speak with them.

However, last season many fans commented that the club had lost its community feel. Players went into separate rooms for food after a game and hardly anyone mingled with the fans still inside the stadium. Naturally, with all the changes made to the stadium’s interior, space is in short supply, but there is no reason why more players couldn’t have mingled with the fans for a while before going home. Last season, it definitely felt like the “togetherness” at the club was not what it once was so let’s hope when fans are allowed back they’ll do everything they can to encourage the engagement between players and supporters.

Fans love going to away games and I know the players appreciate the travelling support they receive. For most away games, we often have to travel 100+ miles each way and are typically giving up 8 to 10 hours of our day. Therefore we feel really appreciated when the players come over to talk to us after an away game, but it can be very disheartening when the time is so limited. Sometimes just a few seconds interaction in the course of a long 10 hour day.

We’ve travelled the length and breadth of this country to watch the team play and hopefully get to talk as many players as we can after the game. Many fans have all said the same thing… “Let’s not forget how women’s football got started… Let’s not forget how the interaction and engagement of fans has helped it grow into what it is today.”

I realise some clubs are trying to make Women’s football more like Men’s where the players don’t interact with the fans anywhere near as much but as I’m sure you’ll know for any business to thrive you’ve got to give your target market AKA your “fan base” what they want.

Football clubs have got to look at what attracted fans to Women’s football in the first place and what they can do to retain their roots and maintain that level of interest. If they end up making Women’s football more like Men’s then they will lose a lot of support because the evidence shows this is certainly not what the fan base want! Some clubs may not realise that there are large sections of Women’s fans who have no interest in their club’s Men’s team. Many Women’s football fans think, act and behave differently to Men’s football fans.

Give the Customer what they Want

In conclusion, for fans attending women’s matches, its absolutely vital that they are able to continue to engage with the players. The feeling amongst both fans and players is mutual. However, talking after a game can sometimes feel so short or infrequent. Therefore being able to meet up and talk at other times throughout the season becomes so much more appealing.

A few clubs, including Blues, have started to host events where loyal season ticket holders can meet up and interact with the players in a relaxed envronment with food and drink. These events are fantastic and judging by the comments made from both fans and players at a previous Blues event it was great to be able to talk at length away from all the pressures of a match day.

Some clubs have made great strides recently but there’s certainly more to come. Hopefully all clubs will remember the Golden Rule of Marketing… “Firstly, Find Out What Your Customers Want… And Then… Give Your Customers What They Want!”