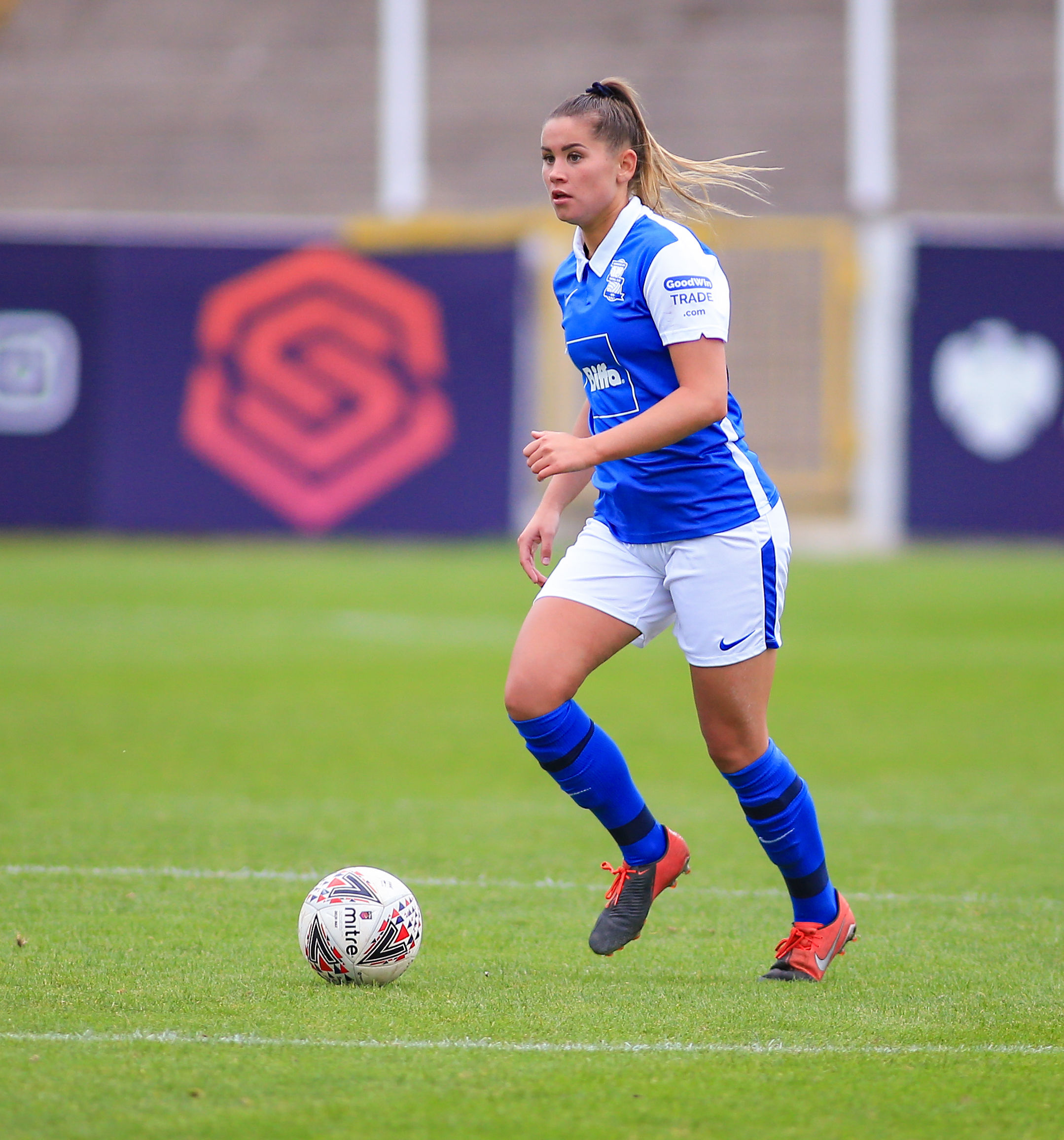 About 6 months ago I wrote an article on how big a difference Georgia Brougham made to the Birmingham City Women side in last season’s fight against relegation. In that piece I talked about Georgia’s loan from Everton coming to an end but hoping and dreaming she would return to Blues this season. My hopes and dreams did come true and to quote Head Coach Carla Ward’s enthusiasm for Brougham “She has been simply flawless in these opening few games.”

To be honest, I couldn’t agree more… Everton have loaned us a gem! Georgia has settled into the side very quickly and she’s showing everyone why she should be starting every game she can.

In fact, she’s been an ever present in the side this season and of course the only game she’s missed was against her parent club Everton… Because let’s face it, Everton Head Coach Willie Kirk was going to do everything he could to stop us progressing in the FA Cup semi-final!

Brougham only played three full games plus one very brief substitute appearance whilst on loan previously at Blues. So why was I so excited when I heard Georgia was returning to Birmingham for another loan?

Two reasons… Firstly, Brougham was absolutely outstanding in her debut game away at Sheffield United but she also was superb in the game away to Chelsea which we all know is not an easy place to go!

On that cold February evening, Blues were on a really poor run of form under previous manager Marta Tejedor and so when you’re playing in front of almost 2,000 Chelsea fans who are all expecting a landslide result of 5-0 or 6-0, Blues did really well to keep the score down to just 2-0.

This was mainly down to the fact the back four of Jordan, Harrop, Brougham and Mayling stuck to their job to the letter. Blues kept a rampant Chelsea side out for almost 45 minutes only to concede on the stroke of half-time due to an unlucky deflected shot.

The second reason I was so excited about Brougham returning was because I had since heard so many good things about her from fans from other clubs. I trust my other footballing friends in their knowledge and opinions as I know it is not biased in any way towards Blues!

Previously, Georgia played for Manchester City and Everton. She has learnt with some of the best and she’s won trophies wherever she’s been.

Brougham joined the City youth academy at a young age and later went on to break into the first team under the guidance of manager Nick Cushing. She was in a team where she was learing alongside the likes of Steph Houghton, Karen Bardsley, Jill Scott, Izzy Christiansen and Toni Duggan.

In 2014, Georgia was part of the Man City team which beat Arsenal in the Continental Cup Final. When you play in a final and you win a trophy at such a young age it really sets the scene for what lies ahead. Football becomes even more exciting and you start to crave even more success.

In 2016, Brougham moved to Everton under the guidance of manager Andy Spence.

In 2017, she was part of the Everton squad which won the WSL 2 Spring Series.

Life at Everton was going really well for Brougham but as time went by changes occurred. Willie Kirk was appointed the new manager in December 2018 and over time he made his own signings. This meant that for one reason or another Georgia was getting less game time and was often a substitute waiting for her chance. The loan move to Birmingham in January 2020 was the perfect opportunity for Brougham to prove her critics wrong.

Football life started really well for Georgia in Birmingham but having only played 4 games for the Blues it all came to an abrupt end when the season was terminated early because of the CO-VID pandemic. The timing couldn’t have been worse for Brougham who’s loan contract expired and she went back to Everton not knowing whether she’d be a regular in Willie Kirk’s side this season or not.

Thankfully, Birmingham came knocking again, and brought Brougham back to the club for a season long loan.

This season Brougham has already proved her critics wrong. By playing alongside the massively experienced Rachel Corsie, she has come along leaps and bounds. When you’re playing at the back you need to read the game… Anticipate what is coming and get your blocks in, precisely, in a timely manner. Not only has Brougham been a competent defender, she also has the confidence and composure to bring the ball out of defence and find one of her teammates with a clever pass.

For me, Georgia Brougham will always be one of the first names on the teamsheet. She can partner with anyone… Rachel Corsie or Gemma Lawley, or if Blues need to mix things up she can even partner with Harriet Scott or Rebecca Holloway. She really has made the difference in the Blues back line.

Georgia may only be here on loan but I believe that is more about the Club’s financial position compared to other WSL clubs as they also brought in two other players on loan, Jamie-Lee Napier and Rachel Corsie which was probably easier than signing someone on a full contract.

To end with quoting Ward again, “Georgia Brougham hasn’t had enough credit for me, she has been exceptional on the pitch, I don’t think I’ve seen her put a foot wrong.” Let’s start hoping and dreaming once again she’ll be offered a full Birmingham City contract before next summer.