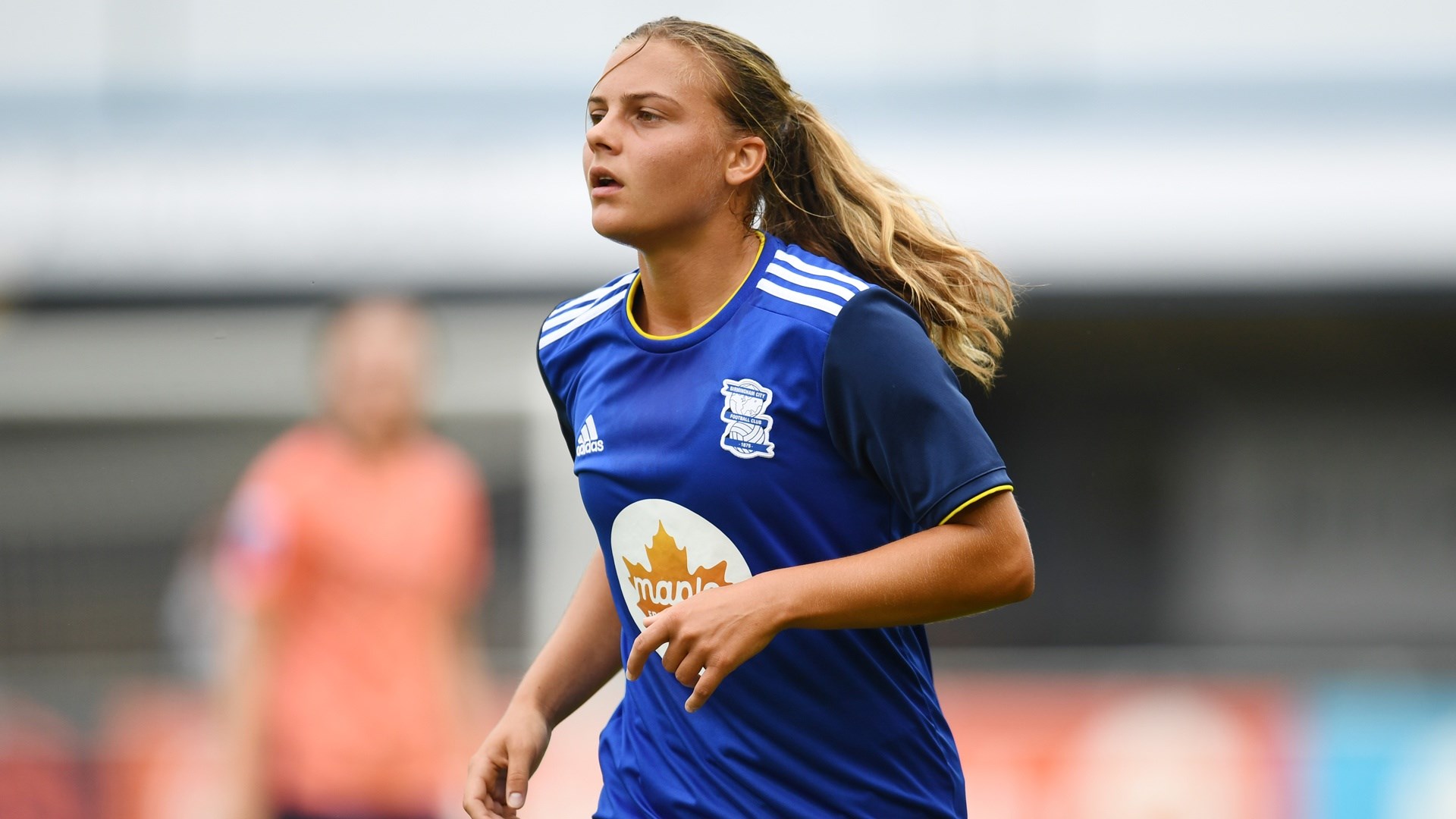 Sarah Mayling started her football career at a very young age including making her debut for England U15s whilst she was still only 13 years old. She’s since gone on to play 24 international games, scoring 4 goals for England U15s, U17s, U19s, U20s and U23s. A rising star you would say!

However, like many others that have played regularly for the various England youth teams, Mayling has yet to be selected for the senior England Lionesses. This article analyses why this may be and also builds a good case for why this may be about to change…

Sarah was very successful at Villa and mainly played in midfield or on the wings as part of a front three.

Her England youth career was also going from strength to strength and during 2014/15 she made an impressive 12 appearances for England U19s scoring 1 goal. However in April 2015, whilst away with England, Sarah suffered an ACL injury which ruled her out for the rest of that season.

During her first few months at Birmingham, Mayling played in every single game of the Spring Series bar one and she also played every game in the FA Cup run culminating in playing in the final at Wembley stadium.

I believe, at that time, there were 3 factors which had an impact on Mayling’s career…

Firstly, Sarah suffered another injury which kept her out at the start of the 2017/18 season. In the run up to Christmas she only played one full game and made two brief substitute appearances whilst she was getting back to full fitness.

Secondly, Skinner had now signed a number of other quality players which meant there was more competition for places. Ever since his initial signings of Mayling and White in January 2017, Skinner went on to sign 5 more players in 2017 and in the summer of 2018 he added even more quality with the signings of Lucy Staniforth, Chloe Arthur and Harriet Scott.

Thirdly, he started playing Mayling more as a full back and less often in midfield or on the wings. It’s great she can be so versatile but did Skinner really know her best position?

These three things together seemed to be a turning point for Sarah.

Over these two seasons she came on 17 times as a substitute but didn’t play at all in 15 out of the 52 games in all competitions. She was also substituted several times in the latter parts of a game swapping places with the likes of Jess Carter, Emma Follis or Lucy Quinn.

The most frustrating thing for Mayling must be that when she was given a chance to play she did have some truly excellent games and really made a significant contribution to the team.

However, I would say this lack of game time was probably the biggest factor why she was never considered for England during this time.

When you compare this to the Spring Series and FA Cup run of 2017 where she started in 11 out of the 12 games, you have to ask… Why did it change so much for Mayling?

Back then I believe it was a case of each factor having a knock-on effect on the others… In other words, the timing of her injury was unfortunate given the number of new signings and over time the competition for places steadily increased in all positions but this was especially true in midfield.

One may have been forgiven for thinking that when Skinner left the club in January 2019 and new manager Marta Tejedor came in that Mayling might be given more of a chance.

However, at first, Tejedor seemed to take a policy of not changing too much from what Skinner had created and this meant not always playing Mayling, but when she did, she continued to play at full back and only on occasion in midfield or on the wing.

Mayling would be right to feel she was hard done by when, after being recognised as one of the very few outstanding players in Blues’ 2-1 defeat away to Brighton in February 2019 she was not selected to start in any of the following three games. What more was she to do?

Sarah finally got her chance in the penultimate game of that season, starting at right back in the 2-0 win over Liverpool at St Andrews in April 2019 and was chosen as joint Player of the Match alongside the equally impressive Charlie Wellings.

Another big turning point for Mayling

In the summer of 2019, no fewer than 10 players departed Birmingham City and the Blues only brought in 5 replacements which meant a much smaller squad.

This proved to be another big turning point for Mayling.

Over the first few games of 2019/20 not only was she starting every game, she was also playing a full 90 minutes every single time. Now she had her chance, and her performances on the pitch showed she meant business. She was getting better and better with every performance regardless of where she played on the park and she was chosen as Player of the Match on more than one occasion.

One of her greatest strengths is in being able to muscle past opposing players and then either put a quality ball into the box or play a clever pass and create more space for herself. In fact, Sarah could easily have marked her 50th appearance for Blues with a goal away at West Ham, when she found herself in space on the edge of the box but hit her shot straight at keeper Brosnan. Mayling admitted afterwards in her own words “I should have buried it!”

Best football of her career

Tejedor mixed things up for the Conti Cup game away to Leicester and included Mayling as part of a front three. Sarah had so much more of the ball in this game, a 5-1 win, putting in several quality crosses and also scoring a spectacular header herself only for it to be questionably ruled out afterwards for offside.

Mayling was now playing some of the best football of her career. In the two games away at Manchester City, she did extremely well to keep another rising England star in check, namely Lauren Hemp. I’m sure this didn’t go unnoticed by Lionesses manager, Phil Neville, who was in attendance.

In fact, she was well on her way to being a contender for Player of the Season until injury struck again, this time in November with a ligament strain which kept Mayling out of action for several weeks. This was so cruel on her given how well she was now playing.

However, she recovered well, and was gently eased back into the side in January by manager Tejedor, getting more and more game time against Arsenal and Reading and then fit enough to play the full 90 minutes against Man City for the third time this season.

By now, Tejedor was starting to give Mayling a bit more freedom and in the game at Sunderland she was playing all over the park often switching from one position to another just to keep the opposition on their toes!

Alongside, Blues RTC and Academy graduate Connie Scofield, Mayling is one of the longest serving players in the current Birmingham City squad. Over her time at Blues, Sarah has become a firm fans’ favourite, and this is despite her background with local rivals Aston Villa.

Sarah has always appreciated the support she receives from the fans and she makes a point of always talking to the fans and trying to give back to them as much as possible. This has included visiting schools, sister clubs, networking events and even socialising with fans in coffee shops and other more enticing hospitality venues! Connecting with the fans including very supportive friends and families throughout the community is one of the reasons why women’s football is continuing to thrive! Building a great rapport with the fans really does make such a difference.

When you look at Mayling’s England youth career, you’ll notice 21 out of her 24 appearances were whilst she was playing for Aston Villa. You cannot deny that at that time, at U17 and U19 levels she was recognised as one of the best midfielders / wingers in the country and she wasn’t even playing for a top tier team back then.

Later, she was one of eight Birmingham City players called up to the England U23 Nordic tournament in 2017 but head coach Marieanne Spacey didn’t feature her.

In 2018 Mayling was called up again to the England U23 Nordic tournament and this time interim head coach Melanie Reay played Mayling in all 3 games.

The U23 has now been rebranded to the U21 squad which of course means Mayling is now too old to be considered, but will she be considered for the senior squad by either manager Phil Neville or whomever may be his successor?

This may sound obvious but generally, in order to be selected for the England senior squad, you need to be recognised as one of the best there is in your preferred position.

But the difference with the younger teams is at youth level you are only competing with others in your same age group.

At full international level you are competing with every other player in the country regardless of their age and how much more experience they may have. To be selected for England you need to be consistently outstanding over a prolonged period of time and of course that includes playing week in, week out, predominantley in the same position.

Given how well Mayling had been playing before the season was so abruptly terminated, you would strongly expect Blues new interim manager, Charlie Baxter, to continue to play her 90 minutes of every game. Baxter, or whomever else may come in, will be able to make their own choices of course but I hope there’s a very good chance Mayling could be deployed back in midfield or on the wing as it was back in the early days.

I’m not suggesting that playing Mayling as a full back is wasteful in any way because she is genuinely very effective in that position, but in my opinion, I am proposing she can play to her strengths more and be more creative further forward and therefore be a greater asset to the team.

Of course, being versatile is also a valuable asset as you can help the team out in so many more ways, but I think for Sarah to be considered seriously for the England Lionesses she needs to settle in one position and then make that her own!

I, for one, can’t wait for her to make her senior England debut but I wonder what number she’ll be wearing?!